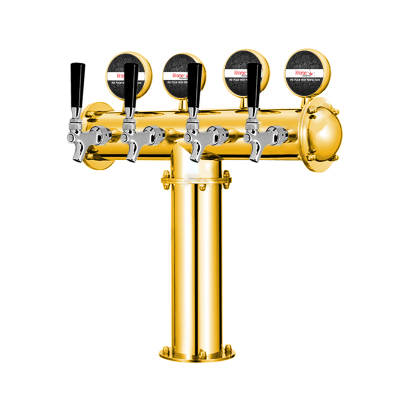 Our Economy 3″ T Tower With 4 Flow Control taps is available in two different type of finishes.

Beer Taps is a used for controlling the release of beer. A draft beer is  a beer that’s “on tap,” as opposed to bottled. Next time you’re at a bar or a restaurant that has a bar, take a look at the bar itself and you’ll see a row of labelled levers. Those are the beers the bar has on tap and they’re generally fresher than the bottled selection. In Our Economy 3″ T Tower We use satisfactory Brass Taps with Rich grade of Plastic Knobs, Which Provides an incomparable Pouring.

In Glycol Recirculation dispensing system, beer temperature is maintained by circulating Glycol solution through a tube in close contact with the beer lines, all wrapped together in an insulating tubing known as the python. Running from beer cooler to the point of dispensing (the beer tap), this system works efficiently even